Franklin D. Azar & Associates, P.C., a law firm based in Aurora, CO, is proud to announce that their team of Denver accident attorneys, led by Senior Attorney Josh Hotchkiss, have won the trial for a cyclist who got injured when a car collided with his bike. According to the firm, "It was such a difficult case with the other party denying they were at fault that most firms would have refused to accept the case or would have encouraged the victim to accept a settlement and avoid the trial." But the Azar law firm embraced the challenge and an Arapahoe County jury has now decided in favor of the victim, awarding him over $240,000.

Attorney Josh Hotchkiss noted, “I think it’s representative of the kind of firm we are. We take on difficult cases, and we’re not afraid to use our resources to help our client. Naturally, our client was very pleased with the result. If you go through something like that with someone, you become very close to him and his family. We were on Cloud Nine for a week.” 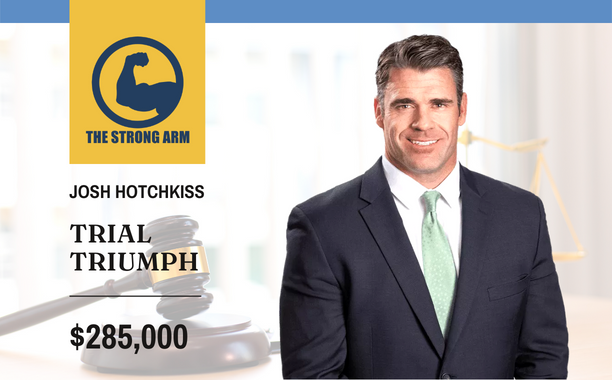 The accident occurred in June 2020 when the client was on a three-hour bike ride because he was training for a triathlon. About 30 minutes from home, he was hit by a car turning right while he was crossing an intersection at South Salida Way and East Iliff Avenue in Aurora, CO. The impact sent him and his bicycle flying and caused him to rupture his rotator cuffs in both shoulders. The lawyers of the car’s driver refused to accept any liability for the accident, claiming that the cyclist was riding after sunset and there were visibility problems. They even filed a countersuit for the damage to the defendant’s car. They only offered a settlement of $25,000, which was about one-tenth of the victim’s medical bills. Therefore, they went to court and provided evidence that their client was in the crosswalk at the time the accident had occurred, arguing that the cyclist has the same rights as a pedestrian crossing the street - and that there was more than enough light to see the cyclist but the defendant had failed to notice the cyclist.

The jury awarded their client the entire amount of his medical bills, including claims for impairment and for his pain and suffering. The jury also found him 30 percent liable for the collision and the adjusted award amounted to $243,543.74, which was more than sufficient to cover the medical expenses and help the victim in his recovery.

Launched in 1987, Franklin D. Azar & Associates, P.C. are focused on providing legal help to personal injury victims. Over the years, they have grown into one of the biggest personal injury law firms in Colorado, and they have also played a major role in representing people in various class action lawsuits. These include victims of car, truck, and motorcycle accidents, pharmaceutical and drug-related injuries, as well as defective and dangerous products. The law firm has already represented thousands of people injured in different kinds of accidents. They have offices in Denver, Thornton, Fort Collins, Aurora, Colorado Springs, Pueblo, and Grand Junction. They are encouraging those who have been injured in a motor vehicle accident, whether it involved a car, bus, motorcycle, or truck, to contact them to find out if they are entitled to compensation.

Franklin D. Azar & Associates, P.C. has received more awards than any other law firm in Colorado. These include the 2020 Elite Advocate award from the American Institute of Legal Advocates, the National Top 100 Trial Lawyers award, 2021 Best Law Firms award from U.S. News.

Frank Azar and Associates was founded on a single guiding principle: to provide resolute and effective legal representation for our clients, so that they can receive full and fair compensation for their injuries.