Dr. Mark Hickman Reveals He Is on a Ministry to Encourage Vasectomy Reversal

Dr. Mark Hickman, MD, FACS, a surgeon in New Braunfels, TX, wants everyone to know that he is on a ministry to discourage vasectomy and to encourage those who have already undergone the procedure to consider a vasectomy reversal. He believes that vasectomy is not the appropriate way for achieving birth control. First of all, he wants to inform those who are considering vasectomy about the horror stories he had heard from many men who underwent the invasive procedure that consists of unnaturally blocking those tubes that have the purpose of carrying sperm out of a man’s body as part of the procreation process. He would then add that many men have felt devastated after discovering that their sexual drive has declined after undergoing the procedure.

Dr. Mark Hickman says, “Vasectomy reversal is not just for my male patients seeking an addition to their family. With an all-inclusive vasectomy reversal cost of $3,300 reversing a vasectomy is now being used to combat the onset of male depression following the original procedure. I can never emphasize enough that vasectomy circumvents God’s design for human sexuality and fertility. And while statistics show that five to seven hundred thousand men undergo vasectomy every year in the US, approximately five percent of them regret their decision and want to undergo a vasectomy reversal procedure.” 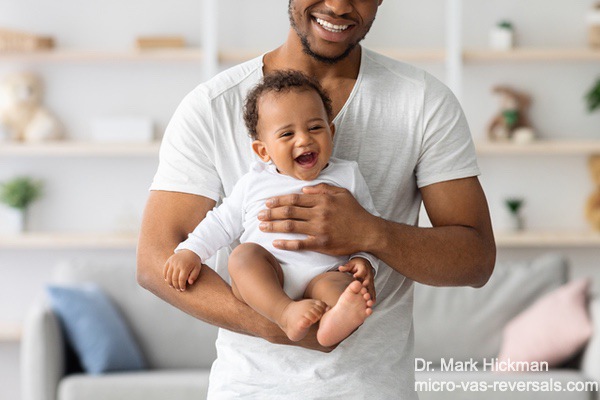 He also wants to warn those who are planning to undergo vasectomy about the experiences of men who went on to develop sexual relationships with other women just because they thought they can now have consequence-free sex. He strongly believes that it is contrary to God’s commandment for men and women to produce children. And while married couples may have practical reasons for controlling the number of children in their family, vasectomy is not way to achieve that purpose because there are a number of natural family planning methods.

As part of his vasectomy reversal ministry, Dr. Hickman has ensured that that the microsurgical vasectomy procedure he is offering is affordable as a way to encourage more men to undergo to procedure to regain their ability to beget children. He is offering two all-inclusive options. One is $3,300 for the procedure, inclusive of local anesthesia and the oral sedation medication. The second one is $4,200 for the procedure, inclusive of IV sedation that is administered by a board certified anesthesiologist.

Dr. Hickman earned his medical degree from the University of Texas Medical Branch in Galveston, TX, after which he underwent extensive training for a duration of five years during his general surgery residency at the University of Texas. It was during this residency that he was introduced to microsurgery that is being performed by plastic and reconstructive surgeons. He soon realized the many benefits offered by microsurgery, particularly in minimizing the impact of a procedure on the patient. He then established his own private practice in New Braunfels in 1988 and in a short time, he gained the reputation of being one of the pioneers in laparoscopic surgery. He is also teaching minimally invasive surgery techniques to other surgeons.

People who would like to get more information on how to reverse a vasectomy can visit the Microsurgical Vasectomy Reversals by Dr. Mark Hickman website, or contact them through the telephone or via email. The practice is open from 8:00 am to 5:00 pm, from Monday to Friday.

February 07, 2023 – Price of a Vasectomy Reversal At Dr. Mark Hickman’s Office Among Lowest In Nation