Suffolk County - DWI lawyer Jason Bassett answers the question “Can I Go to Jail for a DWI on Long Island?” on his recently added blog post. He talks about how driving while intoxicated (DWI) offense carries serious consequences which include a criminal record.

The DWI lawyer says, “The short answer is yes, there is always a possibility that your offense could land you in jail. However, the likelihood of that happening will depend on the exact circumstances around your DWI charge.” 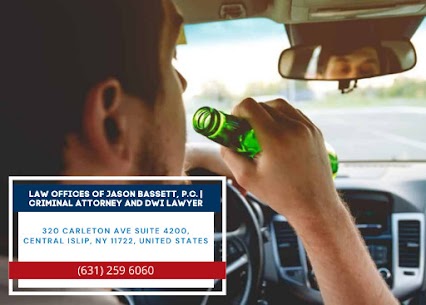 The Suffolk county attorney emphasizes that hiring an experienced DWI lawyer is important for someone who is charged with a DWI offense. He adds that a skilled lawyer may be able to help the defendant receive a more favorable outcome in the case.

Additionally, in the blog post, the lawyer mentions that in New York, the first offense of a DWI is considered a misdemeanor and usually doesn’t require jail time. However, subsequent offenses can be considered felonies and will be punished more severely.

DWI lawyer Jason Bassett also discusses in the blog post that there are a couple of factors that determine jail time. “One of the major factors a judge will evaluate is the question: Is this a first offense or a repeated DWI conviction? In New York, a first-time DWI offense usually does not result in any jail time. Although subsequent offenses do have a greater likelihood for jail time, several other factors are also considered by the courts,” says the DWI attorney.

Aside from the aforementioned, attorney Bassett adds that when the Blood Alcohol Content (BAC) of a person is 0.8%, they will likely be charged with a Driving While Ability Impaired (DWAI). Compared to a DWI, a DWAI can carry a much lighter punishment.

Lastly, DWI attorney Jason Bassett says that the courts can also look at other factors when deciding a possible jail sentence. This can include whether there were other passengers in the vehicle (if an accident occurs) and whether there are children involved.

To learn more about how a DWI lawyer can help, visit https://jbassettlaw.com/can-i-go-to-jail-for-dwi-long-island/.

Jason Bassett Criminal Attorney and his law firm are dedicated to protecting the rights of individuals who have been accused, arrested, and charged with a crime. With over 20 years of experience, attorney Jason Bassett and his team may be able to help the client receive a favorable outcome in the case. To speak with an experienced DWI attorney, call them today at (631) 259-6060.