Okeechobee, Florida based Ultimate Flags Inc is proud to say that their work has been recognized by the United States Marine Corps. The company is dedicated to helping people celebrate the virtues, history and ideas they believe in, with quality flags for sale in an accessible online flag store.

Several months ago, UltimateFlags.com received an email from a Marine. He was asking for USA flags to be donated and shipped to an unknown location overseas to help keep a Special Task Force safe. Jonica Hough, owner of Ultimate Flags Inc., answered the email stating she would be honored to help and asking what their shipping details were in order to receive a care package. 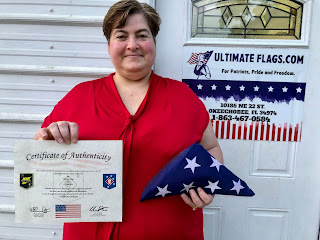 “I wanted our service men and women overseas to know that we care. I wanted them to know that they have our full support. I know being away from home so far away is tough for them and their families. As a mother and patriot, I treat every soldier, sailor, Marine, etc. with the same care I would my own children, and I give them the highest respect,” said Hough.

Back in April, Mrs. Hough sent a care package, with extra content, to go along with the 100 American Flags and did not think anything more of it. About a month went by, following which she received an email back from the USMC SFC Weyandt thanking her for the flags and the extra items that she had included. He said he would send her some pictures soon. Due to the nature of the assignment, Mrs. Hough explained, “I assumed there would be a couple pictures sent to my email but very limited and that would be that.” See the pictures here.

Over the weekend, when Mrs. Hough received her mail, there was a package from USMC Special Task Force with a personal handwritten letter, along with pictures of the Marines with the USA flags and information on where exactly the flags were flown on the trucks, a patch and a certificate of authenticity from the Special Operations Task Force — Syria, Erbil and Iraq.

Hough shared the letter she received, which read, “Dear Ultimate Flags, I want to personally thank you for your donation of flags to the troops in Syria. Due to the sensitivity of the mission, I was unable to get a lot of photos. However, here are some photos and a flag that was flown for you all. This flag not only flew over the HQ in Iraq, it also flew to Syria and was placed on a truck during combat operations (truck pictures included). All your flags will be placed on vehicles and HQ buildings throughout Syria to keep American soldiers safe. From the men and women of Operation Task Force Syria, thank you for your support.” See Ultimate Flags FB page.

Mrs. Hough stated, “I was totally blown away. I didn’t expect him to go into such detail with photos, along with the actual flag and a certificate of authenticity that it was flown on the truck. With everything they do there, this was completely unexpected. I feel blessed to be born and raised in the small southern town of Okeechobee, FL. The people who serve our town care more, the teachers care more, we all look out for each other — it’s just a beautiful place for a family to raise their children to grow up. If you’ve ever lived in a bigger city, you know there’s a different feel to it than Okeechobee. In a bigger city, no one knows anyone, and people just don’t care as much. I am so honored to represent not only the greatest country in the world, but also my hometown of Okeechobee. Growing up in Okeechobee with an amazing group of community leaders has taught me to treat and care for others better. This has taught me that there truly is no place like home."

Ultimate Flags will continue to support the country’s servicemen and women in the Armed Forces. Mrs. Hough stated, "We are proud to help those who have served our country and made so many sacrifices so that we may continue to enjoy our freedom in the greatest country on Earth. A portion of our proceeds will always go to benefit our veterans and servicemen and women currently serving."

Those interested in purchasing flags from Ultimate Flags Inc. can visit their site here. Interested parties may also get in touch with Jonica Hough via email or phone for more details.