The instructors at Maggie Flanigan Studio always say to their students that acting is a craft where one is constantly learning no matter what their level of success in the business is. There is no better example of that than what came out of a recent video interview with professional comedian/actor Ralph Anthony, who recently attended this reputable studio’s best summer intensive acting programs in NYC. In the interview, he stated that he came away impressed with what he learned and that he feels it will greatly benefit him in his future acting and comedic ventures.

Anthony is best known for being comedian ‘Ralph the Mouth’. He is a New York City-based comedian/actor that has done stand-up routines at such famous comedy clubs as Caroline’s on Broadway, Westside Comedy Club, and the Comedy Strip. In 2016 and 2017 he was chosen to compete in the popular ‘Last Comix Standing’ competition that was held at the Mohegan Sun Casino in Connecticut. He toured Europe in 2018 and has also made appearances on ESPN, Amazon TV, Sirius XM radio, and the 2018 NY Comedy Festival. Last year after appearing in Caroline’s Comedy Madness 2019 at Caroline's on Broadway, he was named one of the ‘Breakout Artists in 2019’. His acting credits include a guest appearance on the TV series ‘Comics Watching Comics’. More on his background and professional career can be seen on his website at https://www.ralphthemouth.com/about. 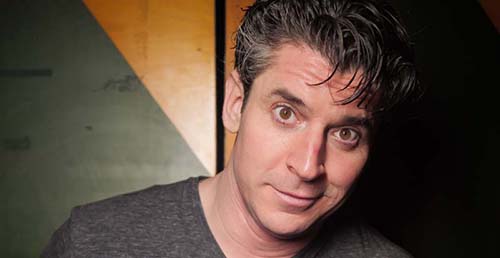 In the interview he granted to those at Maggie Flanigan Studio after being a student at their Summer Intensive Acting Program, Anthony started by saying that he went through a flood of emotions as he was asked to open himself up during the teaching. For him, that was not easy because as a New Yorker he felt he was always supposed to convey a tough exterior image. While attending the course, he said he learned to shift more of his focus to what he felt in his heart instead of the thoughts that came into his head as he had done so often in the past.

He also had nothing but good things to say about the proven Meisner acting technique that the school teaches. In the interview, Anthony specifically mentioned that as a teacher Charlie Sandlan was second to none. The actor/comedian went on to state that the sense of community that was created by the instructors at the studio during the acting training made the experience even more special. He also said he could easily see how these classes could be among the best acting for film summer programs in new york.

When asked in the interview what his biggest takeaway was from the six-week course, Anthony responded, “Charlie and Karen got me to be vulnerable. I almost cried twice in class. I think using my heart instead of my head to expose my vulnerability was the biggest thing that I learned.” He said he plans to use this newfound vulnerability to better connect with his audience in his stand-up comedy routine and as he tries to expand upon his acting career. The actor/comedian also mentioned that he has always been able to play off of his audience and he now feels he will be able to do an even better job of that. That’s because at the Maggie Flanigan Studio summer acting session he has learned to constantly keep his focus on his audience in a similar way that as he does when working with an acting partner. Anthony mentioned that he has already used his newly learned acting techniques with great success in a stand-up routine he had done the previous weekend. He even went to say it was the best half-hour comedy routine he has ever done.

A school representative added that it’s not too late for aspiring and working actors to better hone their drama skills this summer because their renowned acting studio still has intensive summer sessions remaining on its calendar. For those interested in attending ‘summer acting programs near me’, they can contact Maggie Flanigan Studio by phone, email, or by filling out the form on their website.