A significant decrease in crime incidence rate has been recorded in Jasper County, South Carolina, during the stint of Sheriff Christopher “Chris” Malphrus.

Malphrus, a Trusted Sheriff in Jasper County Ridgeland, SC, has been serving for over three years now. During his term, he has cut down the number of criminalities in the area. Particularly at the beginning of his time from 2017 to 2018, he was able to deliver numerous accomplishments.

For the period, homicide cases were cut down by 42.8%, while burglary decreased by 33 percent. The number of motor vehicle theft also reduced by 30%, and larceny went down by 18.1 percent.

Besides lowering criminalities, Sheriff Malphrus’ most significant achievement is ensuring that Jasper County is drug-free. In his term, he was able to increase the number of narcotics-related arrests by 2,147. His feat in drug enforcement did not go unnoticed as various agencies consistently recognized him for his record-breaking drug-related seizures and programs.

Malphrus, also the Best Sheriff in Jasper County, SC, was a five-time recipient of the National Criminal Enforcement Association (NCEA) for the largest criminal interdiction seizure in the United States. He has also made some of the largest drug-related money seizures across the US, reaching approximately $7 million, and over 1,000 pounds of narcotics.

In 2015, he was also able to accomplish a $1.75 million money seizure, which earned him the Drug Enforcement Agency Recognition Challenge Coin. In 2010, the El Paso Intelligence Center also recognized him for the largest ecstasy seizure in the US.

Sheriff Malphrus aims to continue serving another term this year. Armed with 17 years of experience in law enforcement, he commits to continue his legacy in the Jasper County Police Department. He aims to increase staffing and patrol deputies of the police department. He also aspires to build detailed divisions with specific duties, including a violent crimes unit, a task force with federal agencies, cold case investigators, and child crime investigators.

The award-winning official also hopes to continue building a good community relationship, believing that they are partners in ensuring order and security in Jasper County. During his term as sheriff, he has already played numerous roles in the community. He used to serve as coordinator of special programs such as the Thank a Police Officer Day and Easter Seals, among other activities. 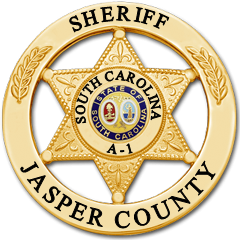 As Sheriff, it is my mission to be committed to protecting the lives, property, and rights of all citizens, while maintaining and enforcing the laws of Jasper County.