Backyard Bug Patrol has just announced that in addition to celebrating the company’s 10th anniversary, they also now offer home exterior rodent control services. Some thoughts on this Great Falls, Virginia based company’s 10th anniversary and other company information can be found here at https://backyardbugpatrol.com/10years. During their time in business, the company has established a reputation in Northern Virginia and Southern Maryland for being a competent and reliable pest elimination option.

Company president, John Mitchell, had this to say about Backyard Bug Patrol’s 10-years in existence, “We are very excited to reach the milestone that’s our 10-year anniversary. As my wife Tracey likes to say, 'we’ve been able to turn Lyme Disease into Limeade.' We credit our longevity to first our fantastic employees. Many have been with us since the early days and our wonderful customers deserve a lot of credit for our success too. Without both, the last 10 years simply would not have been possible. We are so thankful to have helped protect so many families from tick and mosquito-borne illnesses all these years.”

Mitchell says that part of their success over the years is also due to the fact that they have constantly strived to add new services and improve upon some of the older ones too. Their new perimeter rodent control services are a great example of that. He says they have actually been doing this type of work on commercial properties for many years but they just recently implemented a new method that now allows them to do perimeter rodent control for residential customers too. This is a very effective means for keeping rodents and mice from ever getting into a home in the first place. It is done by strategically placing a series of small easily hidden boxes around the exterior of a home or business. The boxes are filled with some very delicious treats that rats and mice like to take back to their nests and share with others. Once these treats are shared it helps to eliminate the rat and mice populations in the areas nearby to any home they are placed around. Although the company has just recently started offering home perimeter rodent control services, they have used them quite effectively in the past around shopping centers, office buildings, and apartment complexes. 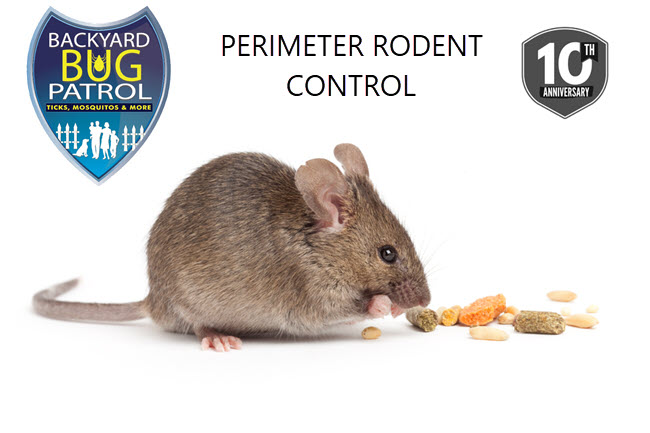 During the company’s 10 years of service, they have also been on the receiving end of many glowing Backyard Bug Patrol reviews. Here is an example of that in a review written by customer Katrina Dvorznak which says, “We’ve used Backyard Bug Patrol for a few years now for tick control. Our yard backs to open space and since we’ve used this service, we have found no ticks at all! If you want to support a local company, get excellent customer service and a superior product, look no further.” She also listed punctuality, quality, responsiveness, and value as positives about the company. There are 30 reviews of the company on their Google business listing. The average of these reviews is a much more than respectable 4.7 out of a possible 5-stars. That is well above the average for most service-based businesses.

As one might have gathered from the company president’s statement about their 10th anniversary, Backyard Bug Patrol is best known for its time-tested tick and mosquito control services. Mitchell says the company is proud to help eliminate these pests for their customers because these insects have a long history of transmitting viruses, bacteria, and diseases that cause a wide variety of ailments. He says ticks are especially worrisome because they are relentless in their pursuit of the blood they use as food and they also latch onto skin and clothing in a manner that’s hard to get them off. Ticks are also known to carry and transmit Lyme disease. This is a hard to diagnose illness that can attack just about any area of the human body with severe consequences. Mitchell went on to state that they are now offering green indoor pest control services too. The company president says that these treatments are done using environmentally friendly, all organic solutions. He says they are very effective at controlling and eliminating such insects as ants, spiders, crickets, silverfish, fleas, and roaches.