Moscow, Idaho based construction tool manufacturer Holstery is pleased to announce that the initial reviews are very positive for their brand new product “HammerMaster: the Tactical Hammer Holder.” The company creates tactical tools and accessories that are designed to assist tradespeople in their work.

The HammerMaster hammer holder is made of stainless steel, genuine Kydex, aircraft-grade rivets, and a FOMI firearm clip. The loop is a custom-formed stainless steel rod, bent so that it gives its users a big target but pulls the hammer close to their body for comfortable carrying. In addition, the strong, replaceable belt clip used in the HammerMaster was originally designed to hold firearms. The glass-filled nylon construction has a tang at the bottom to wrap underneath belts up to 1.75" in width, so it stays in place whether the user is crawling through an attic, getting out of their truck, and so on.

Josh Hartung, Holstery’s owner and creator of the HammerMaster, says, “The HammerMaster hammer holder is the result of my quest to build the best hammer holder anyone has ever had the pleasure of using. I make every single one of these by hand in my workshop in Northern Idaho, and I can personally assure you that its quality is unmatched and, in fact, it is sure to last as long as your favorite Estwing—or maybe even more.”

Hartung’s claims about the hammer holder are backed up by the product’s reviews. On Amazon, the HammerMaster has a rating of 4.6 out of 5 Stars. In his review, W. Robert Watson says, “I received the hammer holster and have had plenty of time to use it (I'm not a fan of reviews of people who have done nothing more than open a box). I work on a dairy and, more often than not, I don't know what I could be into in an hour from now. For that reason alone, the hammer holster is fabulous, clip it on your belt and hit the project. The hammer holster has been used for everything from a 4lb sledge hammer to a dead blow hammer. From a mag light to drill holder (both the nose and belt clip on the drill). If you've ever wished you had another arm to work with, the hammer holster and tape measure holster are the next best thing. The hammer holster is very well built.”

In another review, G. Martin says, “This item was purchased for my wife who operates a cattle ranch. We rotational graze our cattle and use fiberglass poles to separate the fields. My wife has found this item to be very easy to put onto her belt along with being easy to remove it when she is done setting up a field. We have looked at numerous belt-attached hammer holders and found most required to thread onto a belt, which becomes a problem when one has lots of other items already attached to a belt. The holster has been used for a couple of weeks with no issues whatsoever. We will update this after more time has passed to give an honest durability review.”

While the HammerMaster is touted as a hammer holster, the product has multiple uses, as proven by Hunter E.’s review, in which he says, “I use this to hold my cold steel Norse hawk tomahawk when camping, and it is holding up awesome. I'm sure it would hold a hammer just as well, if not better.”

Hartung says, “I worked in the trades for years and struggled with tool belts. I find myself doing multiple jobs in a day. In the morning, I'm framing. Afternoon, finish carpentry. Evening, electrical. Traditional tool belts are massive and bulky, or cheaply made and poorly thought out. I went through most of the ‘traditional’ tool belts and never found something that matched my way of working. I started Holstery to build a lightweight, modular, and ultra-high quality tool belt system that will last a lifetime, and I don't offer a lifetime warranty with any of my products. Instead my approach is that ‘I'll make it right.’ If you ever have a problem, you let me know by emailing me, and I'll make it right.” 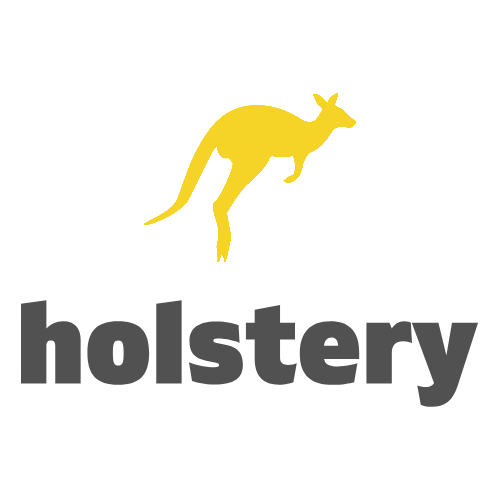 December 05, 2019 – Speed Square Holder Coming Back Due To Popular Demand