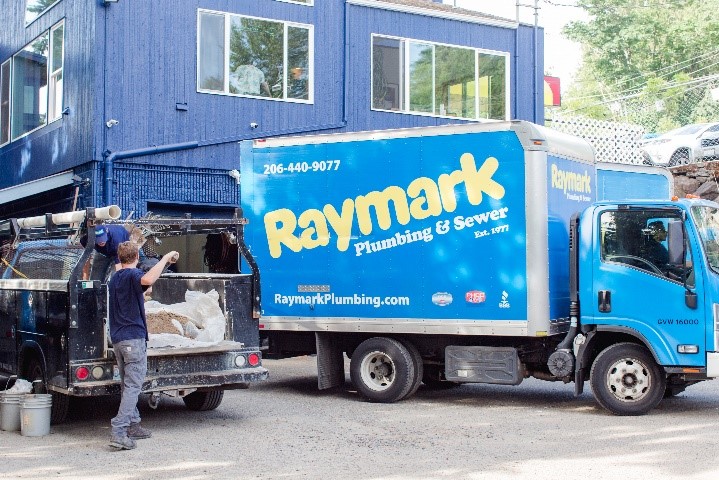 Seattle – Raymark Plumbing and Sewer, based in Seattle, Washington, is highlighting their trenchless plumbing repair in Seattle Washington and neighboring areas this month. The Seattle plumbing company bought the trenchless system of pipe replacement, referred to as pipe bursting, in 2001 and became the first company in Seattle to use this technology on residential side sewers.

Pipe bursting is a valuable method of repairing aged pipes without digging a large hole or a trench in the ground. Historically, the only method to replace these buried lines is by digging out the area above and around the buried lines. While effective, this method often damages lawns, gardens, pools, patios, and other permanent fixtures on a property. With the new technology, however, only a small amount of digging is required. Usually, just one or two access holes are needed.

The way the Seattle trenchless plumbing repair works is by having the new pipe pulled into the damaged pipe with a cable. The old pipe then fractures and bursts, pushing the old pipe outward. Pipe bursting is possible if the existing pipe has collapsed, and there is sufficient room to drag a cable through the old pipe.

In 2001, a project in Fremont Washington to install approximately 80’ of 4” HDPE (high-density polyethylene) pipe through an old concrete sewer line was arranged with several local inspectors from different municipalities in attendance to watch the new technology at work. Kevin Flynn, Raymark’s utility manager, was the crew lead that day and directed the city’s first-ever pull.
“It went seamlessly and impressed the inspectors” states Flynn, “It was passed as an approved method of pipe replacement across the region. Raymark continues to pipe burst sewer lines today.”

Raymark Plumbing is a family-owned company and has operated in Seattle and the surrounding communities for over 40 years. They are registered Side Sewer Contractors and are licensed to work in the City of Seattle right-of-way. To learn more about Raymark Plumbing or to obtain their service, please visit their website at www.raymarkplumbing.com or give them a call at 206-430-1954.

December 27, 2019 – Local Plumber in Seattle, WA is Warning Locals Against Side Sewers