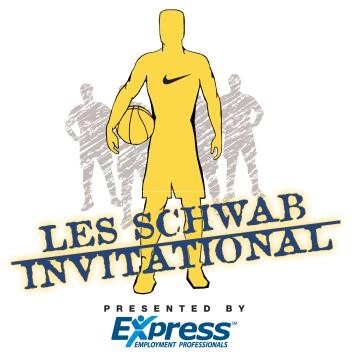 Portland, Ore. – The Les Schwab Invitational (LSI), one of the most prolific holiday high school basketball tournaments in the country, presented by Express Employment Professionals, a leading provider of Hillsboro staffing solutions, returns to Liberty High School this December for 8 days of entertaining basketball games and fun for the entire family. This year marks The 24th Anniversary for the holiday basketball tournament, and it will once again feature future college and NBA stars that the tournament has been accustomed to showcasing for over two decades. This year also marks the second year of “The Eight”, a separate 3-day tournament held the week after the LSI. The Eight (January 2-4) will allow an extended field of Oregon schools to compete against national powers and will also take place at Liberty High School in Hillsboro, Oregon. The Les Schwab Invitational 16 Team Event will maintain its traditional post-Christmas dates and take place December 26 – 30 at Liberty High School. Since the events inception in 1996, over $1.5 million has been raised for Oregon schools.

Headlining the list of teams in “The Eight” is Pacifica Christian High School (Newport Beach, CA) and Mt. Spokane High School (Mead, WA). Pacifica Christian features senior forward Judah Brown (6’8) who has committed to Saint Mary’s College and is considered one of the more intriguing NBA prospects in the state of California. The two west coast programs will battle the reigning 2A and 3A Oregon State Champions in Western Christian (2A) and De La Salle (3A) as well as 6A playoff returnees Sandy, Sherwood, Sunset and Tigard for a chance to win The Eight Championship.

The Les Schwab Invitational 16 Team Event Presented by Express Employment Professionals will feature 3 national powers who are making repeat appearances in the LSI and one making their LSI debut. Bishop Gorman (Las Vegas, NV) returns for the third time (2010, 2013) and will look to bring home their first LSI Championship. The Gaels will be led by a very talented roster with up to seven division 1 players highlighted by their backcourt duo of Top 50 junior Zaon Collins (6’1) and Stanford commit Noah Taitz (6’3). Also returning for their third trip (2001, 2017) and first LSI Championship is Mater Dei (Santa Ana, CA) -The Monarchs are led by future Kentucky Wildcat Guard Devin Askew (6’3) and coached by Gary McKnight who is in his 38th season, having amassed over 1,000 career wins. Eastside Catholic (Seattle, WA) will make the trip down the I-5 corridor returning to the LSI after capturing the inaugural LSI Eight Championship last December. The Crusaders are led by the dynamic junior backcourt of Nolan Hickman (6’1) and Shane Nowell (6’5) who both have Washington and Washington State scholarship offers. In the front court, Eastside Catholic features punishing junior forward JT Tuimoloua who is the #1 football recruit in the country with offers from Alabama, Oregon and USC among others. Making their LSI debut is Norcross (Atlanta, GA), who has a strong pedigree of NBA and high-level college players; and features J.T. Thor (6’8) ranked the #38 player in the senior class.

Headlining the list of Oregon teams is Jefferson High School, the defending 6A runners up, who return two front court starters and in Washington State University commit Nathan Rawlins-Kibonge (6’7) and Kamron Robinson (6’8). The Democrats will also welcome in Marquis “Mookie” Cook (6’6) regarded as a top 25 player nationally in the freshmen class.

The provider of Forest Grove employment, Express Hillsboro, is located at 1001 SE Tualatin Valley Hwy #B34, Hillsboro, OR 97123. For more information regarding Les Schwab Invitational, staffing or employment, stop by, visit www.expresspros.com/HillsboroOR or call (503) 640-3600.

About Express Employment Professionals of Hillsboro, OR:

Locally owned and operated, Express Employment Professionals in Hillsboro, OR is a full-service staffing agency that continually exceeds expectations by providing services to companies in our community while also helping job seekers find employment.

Additional News Releases From Express Employment Professionals of Hillsboro, OR:

May 14, 2019 – A Leading Staffing Agency in Hillsboro, OR Announces Direct Hire Division

March 28, 2019 – One of the Leading Temp Agencies in Hillsboro, OR Attended the International Leadership Conference

January 31, 2019 – One of the Best Temp Agencies in Hillsboro Shares a Survey on How Several Companies Don’t Anticipate a Recession in 2019

December 28, 2018 – Why Seasonal Hire for Employment in Forest Grove, OR Has Slowed and Why It May Be A Good Sign Economically

November 29, 2018 – Safety Standard of ExcellenceSM is Earned by A Top Provider of Employment in Forest Grove, OR

September 28, 2018 – Provider of Employment in Forest Grove, OR Shares Labor Day Poll Results for Blue Collar Employees in the U.S.

August 28, 2018 – Provider of Employment in Forest Grove, OR Celebrates Year for Record Sales