John Menegon, New York City bassist, composer, and arranger, started his career playing bass in Montreal. After having worked for several years on the Canadian jazz scene with the great guitarists Sonny Greenwich, Mike Gauthier, Nelson Simons, and saxophonists Steve Grossman and Pat LaBarbara, he went on to hone his skills in NYC in the mid-80s.

Menegon will feature music composed by “Monk, Bley and Stray” plus his original compositions inspired by their music.

John's 2017 recording, "Blew By Blues" with his group Quartet East features Joel Frahm on saxophones. His 2014 release "I Remember You" includes dedications to some of the musicians who have influenced him musically and creatively over the years.

“Canadian-bred John Menegon is in the line of George Mraz and Michael Moore; a harmonically sophisticated bassist with technical facility who swings hard when it’s called for.” - Downbeat Magazine in a 4-star review. 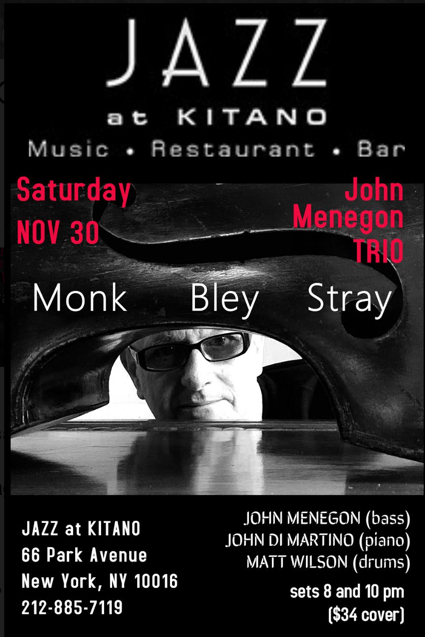 Di Martino is on the recent (2018-19) Grammy-nominated recording with world-renowned and loved vocalist Freddy Cole, brother of the iconic Nat King Cole.

Mr. Di Martino has been described as a "shape-shifter" for his creativity across musical genres. He has performed and recorded with David "Fathead" Newman, Pat Martino, Houston Person, and Taj Mahal, and is a sought-after musical director.

Drummer/Percussionist Matt Wilson, a native of Knoxville, Illinois, is one of the most gifted and sought-after musicians of his generation. Few musicians embody spontaneous energy like Matt Wilson.

Together, with his universally recognized personal warmth, these qualities have made Wilson one of the most in-demand players and educators on the modern
jazz scene.

“There are a few more dazzling drummers working today, but almost nobody in Wilson’s peer group with a broader grasp of jazz or a more natural sense of time, or a stronger signature as a bandleader, or more goodwill among his fellow players.” - Nate Chinen, JazzTimes