Alejandro Garcia and Todd Baker of the highly regarded Steinger, Greene & Feiner Injury Lawyers obtained a $5.5 million verdict on behalf of a victim who was shot at a strip mall in Miami Gardens.

MIAMI, FL – Steinger, Greene & Feiner attorneys Alejandro Garcia and Todd Baker were successful in winning a $5.5 Million verdict for a Miami resident who was shot at a strip mall in Miami Gardens while attending a Halloween party. 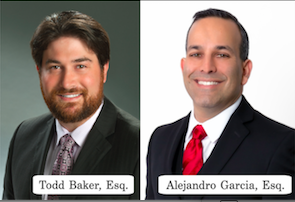 When the plaintiff heard gunfire at the party, he ran for the door. Tragically, he was struck by two bullets. One hit his left arm and shattered his elbow, and the other hit his back and penetrated his spine.

The bullet remained in the Plaintiff’s spinal cord for two years, until he underwent a risky surgery to have it successfully removed. However, he still suffers from many physical ailments as a result of his injuries.

During the court trial, the Defense argued that the Plaintiff was negligent in provoking the attack. The jury disagreed and found no negligence on the part of the Plaintiff. In addition, the jury found that the landlord, tenant, and company who threw the party were all negligent for failing to employ reasonable security measures to keep the patrons safe at the strip mall and party. The strip mall, which had a known history of issues, including twenty-four Class 1 felony crimes, had not taken any actions to instill safety measures or prevent future crimes. This constituted negligent security on behalf of the defendant, management company Boker LLC.

In 1997, Steinger, Greene, & Feiner was founded with the mission to serve and protect the rights of individuals who have been injured due to the negligence of others and bring justice to real people. Today, Steinger, Greene, & Feiner has grown to more than 40 attorneys across 5 offices, from the Treasure Coast to Miami. Learn more about the law firm at www.injurylawyers.com.

Steinger, Green & Feiner was founded with the mission to serve and protect the rights of individuals who have been injured due to the negligence of others, and bring justice to real people in the Miami community.