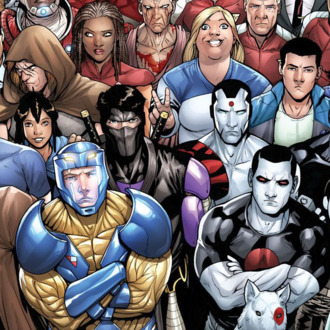 Dan Mintz explains, “Valiant properties are well known for their story-centric approach and emotionally compelling touchpoints. DMG Entertainment’s cinematic creative vision and financing power will propel the Valiant universe toward a global audience, bringing these popular stories to new mediums and changing the way fans can interact with familiar characters. While this multi-platform initiative prioritizes both the cinematic and publishing landscapes, the intention is to expand the Valiant universe to gaming and theme parks in the future. DMG Entertainment already has Valiant-based projects in development, production, and post-production including television shows and feature films.”

Currently, DMG Entertainment is in production for the film “Bloodshot” with Sony Pictures. The film is expected to be shown in movie theaters by February 21, 2020 and will be the first film in a five-picture deal with Sony Pictures. Bloodshot is one of the most successful comic book series during the past 20 years with more than 100 issues published and lifetime sales of more than 7 million copies in different languages in various parts of the world.

The superhero Bloodshot is a soldier who was brought back to life by a team of scientists with use of nanotechnology. He became a bounty hunter for outcast superhumans. Vin Diesel plays the role of Bloodshot. Other upcoming films from the Valiant library are Harbinger, Faith, Shadowman, Quantum & Woody, Grace of Kings, and Mistborn.

Meanwhile, DMG Entertainment plans to make a $300 million investment in technology, entertainment and media. DMG will be working with business operators, entrepreneurs, and private equity or venture capital firms that want to grow internationally with global investments. Currently, China is the second-biggest box office all over the world and it is a territory that is familiar to DMG executives. The company will be focusing on investments in gaming; immersive media; film; licensing; television such as traditional pay TV, Internet TV and free TV; mobile and e-commerce platforms; and software and services related to entertainment, media, and communications.

DMG Entertainment has also recently established a virtual reality unit, known as DMG VR, with Arcturus as the first investment of the division. DMG VR is focused on using state of the art technology and hardware for providing the most realistic film capture.

DMG Entertainment was founded in 1994 by Dan Mintz and Bing Wu. Throughout the years, the company’s portfolio has grown to include a wide range of holdings in television, motion pictures, gaming, comic book publishing, location-based entertainment, and next-gen technology. It operates both as a production and distribution company and it is best known for the films, Iron Man 3 and Looper.

DMG Entertainment is a global media and entertainment company based in Beverly Hills, CA.

April 23, 2019 – DMG Entertainment's Valiant is the Next Superhero Universe