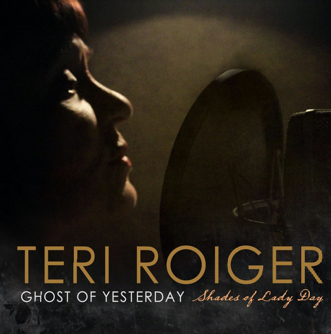 Teri Roiger, known for interpreting the music of Abbey Lincoln, Billy Strayhorn, Billie Holiday and Thelonius Monk, brings her trio to Mezzrow jazz club in New York City once again for a celebration of her birthday and pre Valentines Day bash.

Her latest release, “Ghost of Yesterday, Shades of Lady Day”, highlights many of the songs most associated with Billie Holiday, also known as Lady Day. (I Don’t Stand A) Ghost of a Chance, What a Little Moonlight Can Do, You Don’t Know What Love Is, Fine and Mellow, Them There Eyes, It’s Easy To Remember, Do You Know What It Means to Miss New Orleans, Ghost of Yesterday, These Foolish Things and Lady Sings the Blues.

The singer also continues to put forth her versions of love songs culled from the Great American Songbook. Most notably her versions of “My Foolish Heart” and “The Very Thought Of You” which she delivers with emotion and finesse in her unique style.

Along with her husband, bassist John Menegon, she has created original arrangements of music from the American Songbook and gives her fresh twist to beloved songs.

Her version of “You Don’t Know What Love Is” on her most recent CD, “Ghost Of Yesterday, Shades of Lady Day” on Dot Time Records, delivers a hauntingly beautiful bansuri flute by Steve Gorn.

Ms. Roiger surrounds herself with the finest musicians, both in live performance and in the studio. Bassist John Menegon, also a composer and producer, brings his warmth and creativity to each performance. A native of Canada, Menegon now resides in upstate NY and NYC along with Roiger. The two make a dynamic tour de force and they have created “Jazzstock,” a Hudson Valley NY jazz concert series in the refurbished Senate Garage space in Kingston, NY.

This evenings trio also includes her longtime recording and bandmate pianist, Frank Kimbrough. Kimbrough has recently been honored for his interpretation of Thelonius Monk music by the NPR Music Poll. Mr. Kimbrough has a clean, solid presence at the piano. His harmonic choices and rhythmic creativity are both open and in the tradition, a refreshing blend of traditional and modern sensibilities.

Steve Williams, one of the most sought after drummers in New York City, supplies the rhythm and sound palate, that both excites and relaxes the listener. Featured on many recordings of famous artists, Mr. Williams was the longtime drummer for Washington DC native, Shirley Horn, herself a multiple Grammy winner and vocal phenomenon in the jazz world. His approach to vocals is emotional and responsive with understated cymbal work and almost symbiotic phrasing to complement the vocal.

"Teri Roiger has a voice like the finest bittersweet chocolate full of rich, dark, contradicting flavors that miraculously blend to create one of the most original vocal instruments in decades," said Vic Garbarini in Playboy Magazine.

"To hear Teri Roiger is to experience that peculiarly beautiful combination of improvisation, tone, feeling, and phrasing that are distinct elements of jazz freedom. She is made for those who still understand the meaning of the term the real thing," says Stanley Crouch, Author, Cultural Critic & 2019 NEA Jazz Master.