Rapid growth prompts a rebranding for Rice & Associates to BIZJETCPA.

BIZJETCPA is the leading West Coast firm of Certified Public Accountants offering its services exclusively to the business aviation community. The 25-year-old company was initially founded to focus on taxes for aircraft and maritime vessels. BIZJETCPA has since eliminated the maritime practice in favor of the ever-expanding business aviation work. This expansion has more recently included increased demand from international clients as development of the world-wide economy has increased interest in potential aircraft ownership.

Initially started as a solo-practitioner, BIZJETCPA has grown to five full time employees including a new firm administrator position. In order to accommodate such growth, in 2017 the company relocated its offices to 3200 Park Center Drive, Suite 550, Costa Mesa, CA 92626.

“We have grown substantially,” said Founder George Rice. “As we’ve taken on more professionals, I realized the firm was much larger than just myself. We deserve a name that better illustrates our specialty in business aviation. We bring aviation tax expertise to our clients, so they can remain focused on their core business.” 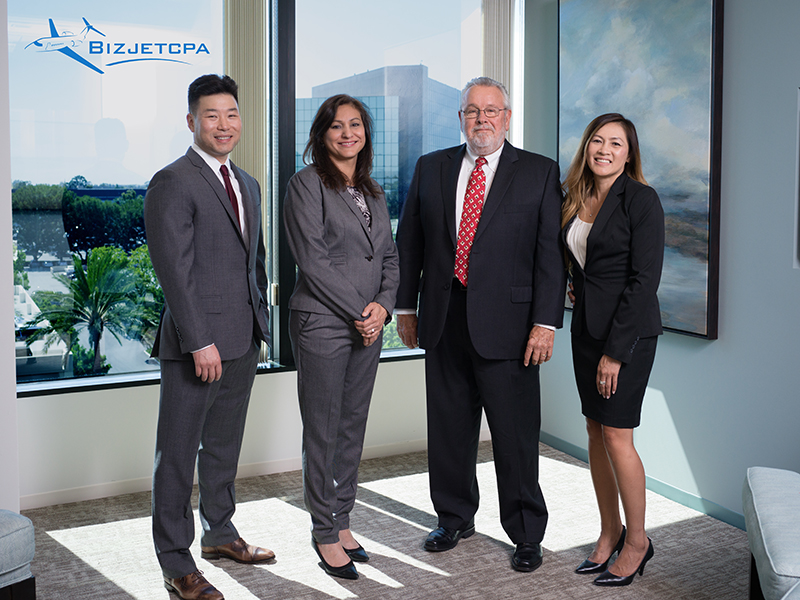 After starting his career in public accounting, George held various C- suite level positions in both private and public companies before deciding to build his own firm.

Denelle Keeler, who manages the firm’s California aircraft sales, use and property tax practice, has been with the firm over ten years.

Laura Sandusky, who joined the team from the IRS in 2014, specializes in federal tax issues including federal excise tax and is responsible for all client accounting and reporting functions relating to personal use of business aircraft.

Joe Park joined the team in 2017 from a large international public accounting firm to support the firm’s growing international business and to supervise all aspects of the practice.

Founded by George Rice in 1993, BIZJETCPA has expanded rapidly and the firm now provides services to clients across the 50 states and several foreign countries.

George Rice has served as a member of the NBAA Tax Committee in various capacities for 10 years. BIZJETCPA can be reached online at BIZJETCPA.com and by phone at 714-540-6400.

January 17, 2019 – How the US Government Shutdown Impacts Flight Training for Future Pilots