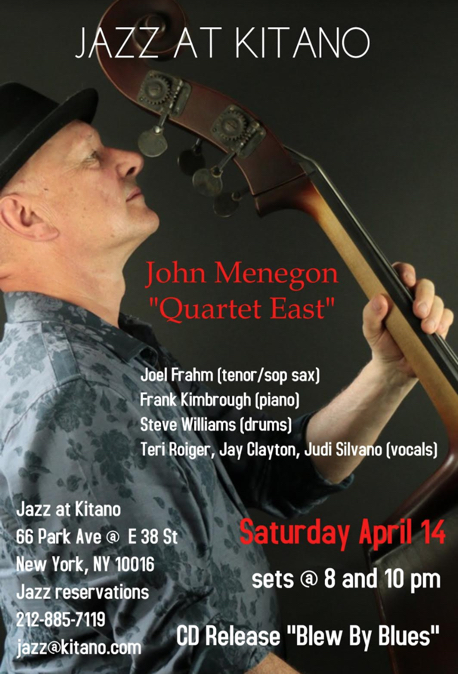 John Menegon and “Quartet East” Celebrate the release of "Blew By Blues " music composed and performed in tribute to the late, great bassist Charlie Haden at Kitano Hotel in New York City on April 14, 2018. There will be two shows, reservations suggested.

Mr. Menegon worked with legendary Texas tenors David "Fathead" Newman and Dewey Redman, recording and touring the world with them for over a decade. His more recent collaborations include Joe Lovano, Joel Frahm, Frank Kimbrough, Ed Cherry and James Weidman among other jazz luminaries.

An inventive and creative writer, Menegon combines the language of both traditional and “nu” jazz. He utilizes his own spoken word on this project and on this CD is joined by 4 vocalists whose soaring voices bring the element of the human voice to the music.

The new recording features the “Quartet East” band, pianist Frank Kimbrough, Joel Frahm (tenor and soprano saxophone) and Steve Williams (drums). It is a soulful and heartfelt passionate tribute to bassist Charlie Haden who was one of the founders of the “modern jazz” movement in the United States.

Menegon brings the unit together to form an organized, cohesive ensemble. His compositions bring essential musical elements together with astute musical taste. The music flows with both passion and urgency reflecting the social crisis in the United States today. He chooses to musically discuss both the beauty and the ugliness of the social milieu of the current times, with both dignity and reserve, yet strong commentary.

The players featured are all “jazz cats” in the best sense and the added vocals will bring a unique dimension to the evening.