SSC has been at the Greenville Downtown Airport since 1954. A lot has changed since then. And not all the change in the aviation industry or in communities has been for the better. Many have heard about neighborhoods that change character and grow to surround airports, sometimes causing uneasy relationships between the new “neighbors”.

Meigs Field in Chicago and the Santa Monica airport are famous examples of airports in contention with residents and local government. Meigs Field, once the busiest single-strip airport in the United States, was closed in 2003 when Mayor Richard M. Daley ordered the runway destroyed by bulldozers. At the Santa Monica Airport (SMO,) the city shortened the runway from 4,973 to 3,500 feet by repainting the runway and removing navigational aids in December 2017 in an effort to reduce jet traffic at the airport.

If one were to look for an OPPOSITE to the Santa Monica Airport or Meigs Field, it would be the Greenville Downtown Airport (GMU) the busiest general aviation airport in South Carolina, and one that is wholeheartedly embraced and supported by the community.

“Situations (like the Chicago and Santa Monica airports) happen when the average person in the community doesn’t hear about the airport unless it’s something negative,” said Associate Director Lara L. Kaufmann. “And sometimes there’s this feeling that general aviation is just for private jets used by the rich. People need to know about the life saving flights, pet rescues, flight training, law enforcement and news media that also use the airport. We want everyone in Greenville to know this is THEIR airport! Our facility, through our restaurant, park and observation areas, provides places where our citizens can see aviation in action and learn more about it.”

The story is outlined in a 2012 blog post on SSC's website - Kaufmann started a campaign to make GMU more open and community-based after moving from Atlanta and looking for opportunities for her two boys to enjoy the airport. Airport Director Joe Frasher has been working with Kaufmann ever since on a number of projects that make the airport appealing to everyone in the community, including parents with kids, educators, foodies, scouting advocates, theater fans, WWII veterans, vehicle restorers, local businesses, athletes, and many other groups not usually thought of as part of the “aviation community.” 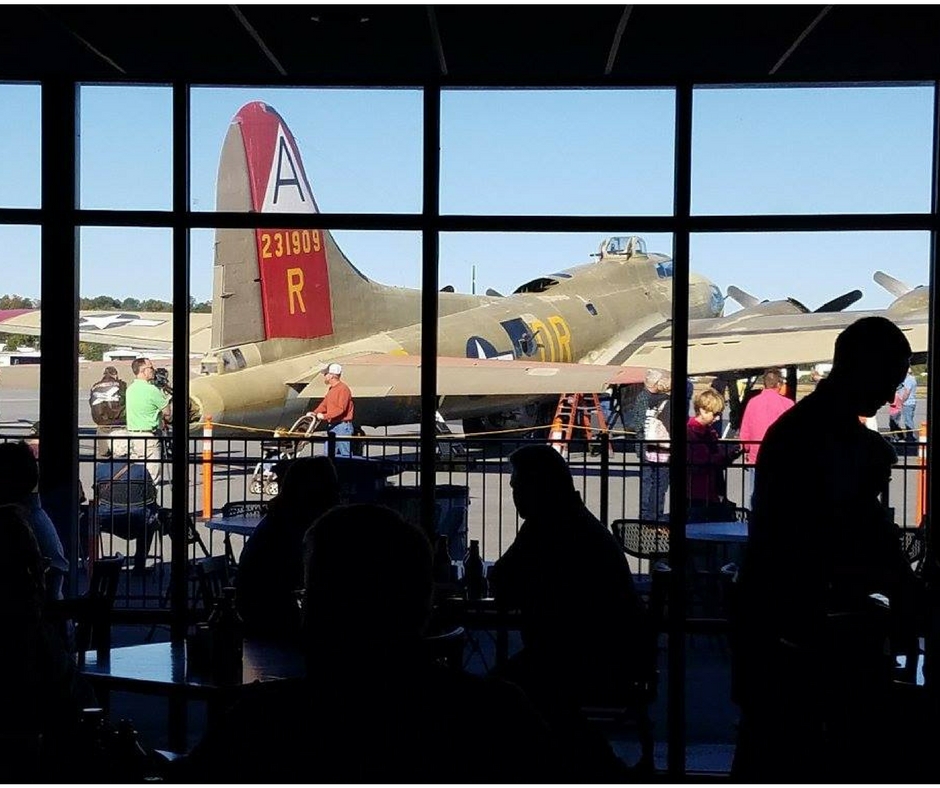 In 2012, the Runway Cafe was open, and fundraisers were underway for major improvements at the Runway Park to support school field trips.

A lot has happened since then. The airport, cafe and park have thrived. A Military History Museum is developing at the airport, and plans are in the works for a new parking lot to serve the airport’s “Community Corridor”, and an aviation themed splash pad and mini-golf course are being developed.

A $160,000 renovation of a vacant military style Butler building on the airport’s property was completed as phase one of construction for the developing Military History Museum. “We wanted a museum that wasn’t just memorabilia in glass cases. This is meant to be fun and interactive. We have a Jeep in the museum where kids can get dressed up and have their pictures taken and really get hands-on,” said Kaufmann. 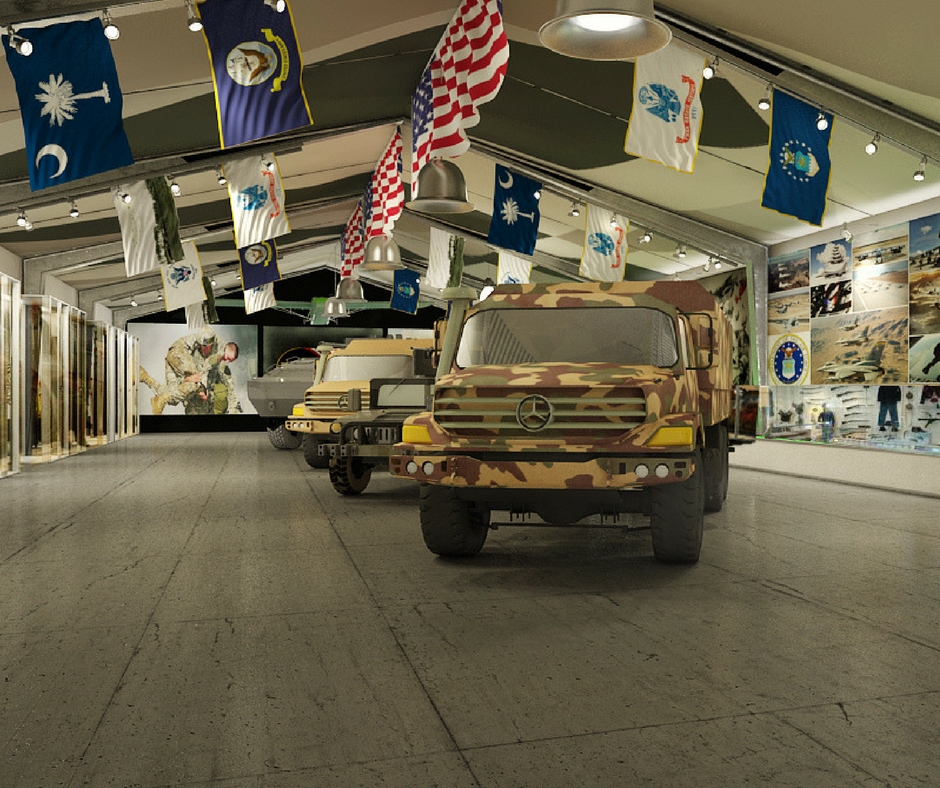 Many people don’t want to be the first to donate, particularly on a large project, but Kaufmann motivated the community with transparency about the project and showing small successes along the way. Volunteers spent hundreds of hours gutting the building. In addition to direct fundraising, Kaufmann approached tradespeople to accomplish many of the projects. Many individuals and companies are listed on the website as donors. The Roto-Rooter in Greenville donated over $22,000 in free labor in setting up the bathrooms, and replacing plumbing discovered to be inadequate. Local citizens donated uniforms, armaments and other military items. The new museum has hosted a Pearl Harbor Remembrance on December 9 with hundreds of guests in attendance.

A few of the recent and planned events at the airport show the diversity of community involvement.

The South Carolina Breakfast Club who has met every other Sunday, in and around South Carolina, since 1938 , visits the Runway Cafe each year. Pilots and non-pilots meet for a traditional Southern breakfast, no membership or meeting requirements.

FOD Walk – Community members are invited to meet in the tower lobby, bring flashlights & bags to walk both runways and pick up Foreign Objects & Debris (FOD) and finish with coffee and donuts.

Wings of Freedom Tour – WWII aircraft visit each October and are met by thousands of local residents.

“Meet” Winston Churchill – The Greenville Chapter of the Chautauqua Society teaches history in a fun and interactive way by bringing actors impersonating famous people to the airport. Through this program the airport has had Amelia Earhart Revisit Greenville and Walter Cronkite Interview Elvis.

Take Flight 5K - A recurring family-friendly event where people can run or walk down the airport’s main runway. The money raised goes towards improving the airport’s “Community Corridor” which includes Runway Park.

2017 Eclipse – While the Park had no formal events, it was on the path for ideal viewing of the 2017 eclipse. Hundreds of people in cars with out-of-state plates visited the park, and remarked on the aviation-themed playground equipment, the Boeing fuselage section that serves as an archway at the entrance of the park, and educational aviation signs around the park.

Pavilion Rental – A pavilion at the park is available for rental by local families and groups to host their own events. Funds from renting the pavilion are devoted to improving the airport’s “Community Corridor” which includes Runway Park.

School Field Trips and Tours – The airport hosts two programs. All students get to climb inside a real aircraft and meet a pilot! Students fifth grade and under learn about aviation through a fun interactive lesson. Sixth grade and above students learn about aviation careers. Parents are requested to donate $5 per child for these trips. The money raised goes towards improving the airport’s “Community Corridor” which includes Runway Park.

Kaufman and Frasher are often asked for advice in revitalizing failing or contentious airport situations. “Most airport directors have a full-time job with airport administration, and don’t have time for the projects and the fundraising and outreach that Lara has managed,” said Frasher. “You really can’t do this without help.”

Kaufmann agrees. “If I had to do it over again, I’m not sure I would even get started,” she laughs. “This has been a LOT more work than I ever expected,” But she did offer a bit of advice. “Roll with the punches. Don’t give up. Find a way,” she said, citing her latest challenge – bids for the parking lot came in a lot higher than expected. “It’s back to the drawing board, but we’ll find a way and get it done.” She also said expressing appreciation is key.

“Joe is a neat freak. He’s the kind of guy who will stop his car and pick up litter at the park. He hires people like that as well, and the airport staff that maintain the facilities are always supportive of events even though it means a lot of extra work for them. They take a lot of pride in their work,” said Kaufmann.

Getting other groups involved is helpful. “Spartanburg Downtown Airport in SC is getting a park near their airport, because they were able to get their local parks department involved in funding, design and maintenance. It is great to have more resources involved,” said Kaufmann. Giving up some “ownership” to other groups and organizations is complicated, but powerful.

“About SSC? They’re always willing to pitch in. They have the most beautiful, spotless hangar. They hosted the SouthEast Aviation Expo in their hangar when it was at GMU, and they helped us with the museum by lending us their floor cleaning equipment and showing us how to use it. They’ve also been enthusiastic about helping with the Scouting program – we had a kid working on an aviation badge that was really interested in aviation, I called Doug Goldstrom at SSC and asked if he had a few minutes, he said, ‘come on over,’ and we spent a couple of hours looking at planes and talking to pilots. I ran into the kid’s mom later at the grocery store, she said he hasn’t yet stopped talking about it.” SSC also makes annual financial donations during the 5K Runway Run to support these efforts.

SSC (Special Services Corporation) offers charter flights, aircraft maintenance, and aircraft management at the GMU airport, and is happy to be part of such a great community, and proud to be the oldest tenant at a great airport.

January 17, 2019 – How the US Government Shutdown Impacts Flight Training for Future Pilots