Toronto Functional Medicine Centre, an integrative center for functional medicine in Toronto, is enlightening patients on several therapies for those suffering from an iron deficiency. Readers can find out more about the symptoms one should look out for to discern whether they might be lacking in iron by heading over to the center’s blog post explaining the conditions and associated therapies. You can also check this brief summary about the guide for Toronto patients for Iron deficiency.

Though North American diets are rich in most nutrients and malnutrition is a rare occurrence in this part of the developed world, there could be a few reasons why someone might be predisposed for an iron deficiency. These factors could be age, gender, or any existing conditions. For example, according to Toronto Functional Medicine Centre, people who are naturally predisposed to an iron deficiency include premature infants, blood donors, cancer patients, patients with gastrointestinal disorders, teenage girls, pregnant teenagers, pregnant women, and women with heavy periods. In support of its claim, the blog post cites the health journal Blood which says, “Women of childbearing potential are at highest risk of [iron deficiency] due to regular menstrual losses as well as the increased iron demands of pregnancy and lactation.”

Iron is one of the crucial components needed for the body’s physiological process that leads to the formation of red blood cells. A lack of iron in the diet can lead to anemia, a condition in which the body lacks enough healthy red blood cells to carry adequate oxygen to the body's tissues. Anemia is a commonly diagnosed condition as, globally, it is found in 30% of pregnant women. According to the CDC, “Anemia during pregnancy increases the risk of death for the mother and low birth weight for the infant. Worldwide, maternal and neonatal deaths total between 2.5 million and 3.4 million each year.” Iron is also required for other important bodily functions that vary according to the person’s age including supporting a child’s development and motor skills and helping produce hormones.

Some common symptoms to watch out for that may indicate an iron deficiency include chest pain, fast heartbeat or shortness of breath, fatigue, low energy levels, memory issues, and weakened immune function. Moreover, children with an iron deficiency may develop issues with learning.

However, there are a few caveats when it comes to consuming additional iron to make up for a deficiency. Firstly, the National Institutes of Health (NIH) explains that some chronic diseases such as rheumatoid arthritis, inflammatory bowel disease, and some types of cancer can interfere with the body’s ability to use its stored iron. Consuming iron in excessive quantities can also trigger stomach aches, vomiting, and constipation while lessening the body’s zinc nutrient absorption.

Toronto Functional Medicine Centre recommends seeking guidance from a health care practitioner before embarking on therapies to correct iron deficiency. They also suggest getting blood tests done to see if you have a deficiency; this can also determine which beneficial ingredients should be part of your vitamin IV therapy for supporting iron absorption. The blood work can be completed at a Toronto laboratory, and, after conducting a blood work review, their health care providers will advise how to improve your iron intake. (Refer to the chart below for various forms of iron deficiency therapies): 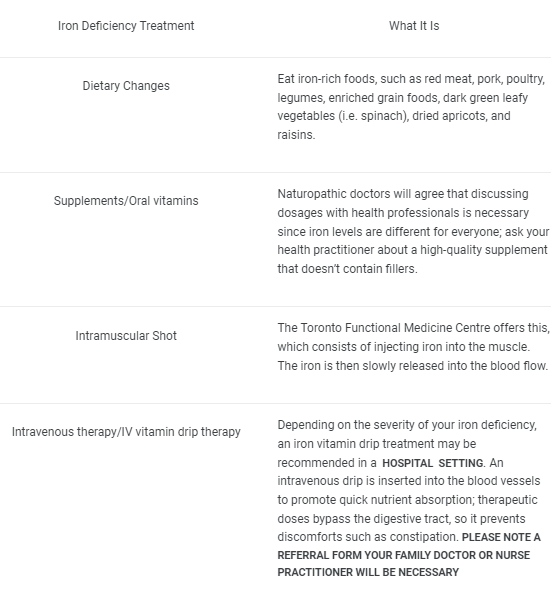 Readers interested in finding out more about all the therapies offered at Toronto Functional Medicine Centre can visit its website for more details. The center also recently published a press release regarding its IV therapy for Folate or Vitamin B9 which can be read by heading over to the link: IV Therapy Folate Deficiency Management. To contact the clinic, call (416) 968-6961 or email at info@tfm.care.

June 22, 2022 – Toronto Functional Medicine Centre Explains How Mistletoe IV Therapy May Help and How It Works

June 07, 2022 – Functional Medicine Toronto Practice Offers Guide on the Use of Clomid for Fertility Issues

May 27, 2022 – Toronto Functional Medicine Centre Examines How NAD IV Therapy May Be Used as Anti-Aging Tool